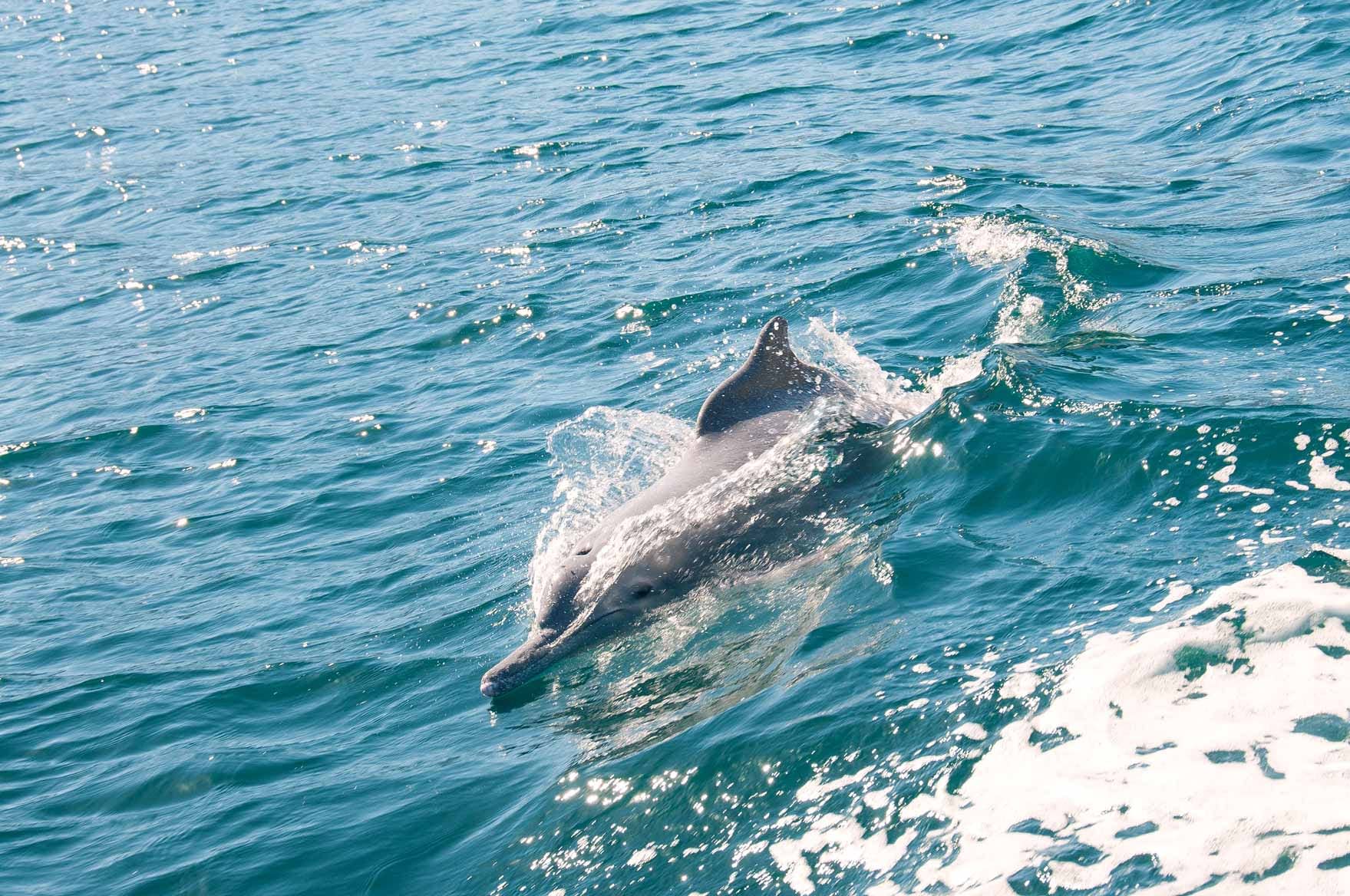 In the underwater world along the Omani coasts of the Indian Ocean, from the northern region of Musandam to the southern region of Dhofar, there is a large variety of whales. The water world is filled with not only different types of whales but also dolphins and porpoises.
About 50 million years ago, these huge mammals began evolving in our oceans. At the same time, the greatest challenge was to adapt to breathing to life in the water. As usual, nature solved the problem creatively. Over millennia, the nostrils developed into so-called blowholes and migrated from the nose to the back of the head. The former inhabitants of land also adapted themselves to movement underwater, forming streamlined bodies, tail flukes and back fins. Even the fur needed on land was eventually obsolete and got replaced by a warming layer of fat. This evolutionary adaptation now protects the animals from the cold in polar waters as well as in the great depths and at the same time serves as a food source. The habitat of these mammals encompasses practically all oceans. As mammals, they also bring their offspring into the world underwater, but underwater breathing through gills is reserved only for fish.
Unlike fish, cetaceans must come to the water’s surface at regular intervals to breathe in the fresh air. Large whales exchange the air in a few seconds through their blowholes and usually take a breath every two minutes. With full lungs, they can stay underwater for up to ninety minutes and thus can hunt for food in very deep depths. Dolphins, on the other hand, breathe about three times a minute and can only stay underwater for fifteen minutes at the most, in exceptional cases. While whales in the water are more like sluggish gliders, dolphins can move quickly and go as fast as 50 km/h. Accordingly, it is impressive when dolphins appear next to speed boats and playfully pace the craft at full speed.
In general, a distinction is made between baleen whales and toothed whales. As the name suggests, the latter subordination has teeth in its jaw. The toothed whales include dolphins, spawning whales, sperm whales, beaked whales, harbor porpoises, Amazon dolphins and many more species. Baleen whales, on the other hand, have horny plates instead of teeth in the upper jaw, with which they filter krill and plankton out of the water. Apart from the sperm whale, the largest whales belong to this suborder. As the largest whale on the planet, the blue whale is probably the best-known representative. Unfortunately, there are only about 10 000 of these giants living in our seas. The Omani Whale and Dolphin Research Group has documented only seven Blue Whale sightings since 2000. Something noteworthy is the behavior of a humpback whale group living off the coast of Oman. It is the world’s only humpback whale population that is permanently in the same location and does not travel long distances like other humpback whales.
Finding whales to watch in their natural habitat is much more difficult than finding dolphins. In Oman, however, the likelihood of seeing the rare marine creatures is relatively high. In the Dhofar region, around Salalah, interested visitors can participate in whale watching excursions – but it takes patience and a bit of luck to actually spot a whale. It is far easier to find one of the different types of dolphins. The most common are the Omani porpoises as well as spinner and roundhead dolphins. The fascinating animals can be observed practically anywhere along the entire coast on organized boat trips. To experience the playful artifice of the dolphins from a boat is, therefore, one of the highlights of any trip to Oman.