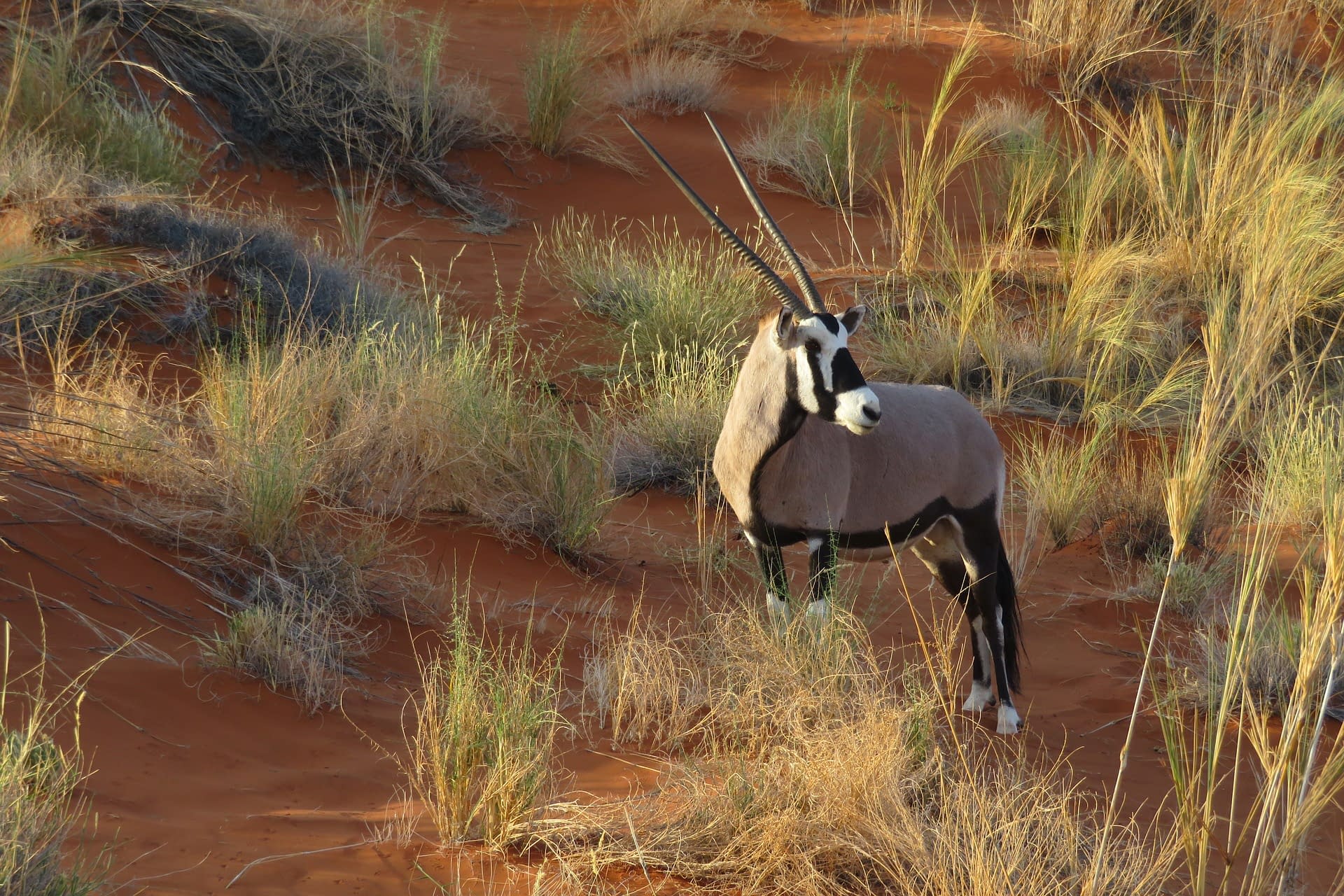 Within the animal kingdom, the rare Oryx antelope belongs to the subfamily of horse goats and thus forms its own subspecies. Its natural habitat includes semi-arid and arid landscapes, such as those found on the Arabian Peninsula. Hence, Oman is part of the original habitat of the Oryx antelopes.

The characteristics of the Oryx antelopes are their very bright coats and their spirally curved horns. Arabian Oryx antelopes have a shoulder height of up to 100 cm, a horn length of up to 70 cm and can reach a weight of just under 80 kg. A typical identifying feature of the Oryx is the dark brown and white head decoration. Their light coat color is owed to their adaptation to their habitat. In the bright sunlight and constant heat haze of the desert, the animals are incredibly hard to spot and blend in perfectly with the landscape.

Like other desert animals, Arabian Oryx antelopes are perfectly adapted to their habitat and require very little fluid. For survival, the Oryx antelope obtains its required moisture by absorbing the morning dew or through food intake. If necessary, the animals can cover their fluid requirements with the moisture that accumulates in the fur of other animals. Usually, the Oryx feed on dry shrubs, buds, leaves or grasses. Originally, the Arabian Oryx were found throughout the Arabian Peninsula as far away as the Sinai Peninsula. However, extreme poaching by foreign and domestic hunters led to the undoing of all Oryx living there. Recently, with the arrival of four-wheel-drive vehicles, poachers have also reached remote desert areas and since 1972 have hunted into extinction almost all wild Oryx on the Arabian Peninsula. Fortunately, a few years ago, an animal conservation program was launched in the USA to prevent their complete eradication. The animals living there are now regarded as a world reserve to supplement all living Oryx antelopes. In 1979, the government led by Sultan Qaboos initiated a project to reintroduce and release the Oryx into the deserts of Oman.

To this day, the Arabian Oryx live in their protected area in the Jiddat al-Harris region in the middle of Oman. Although this site was included in the list of UNESCO World Heritage sites in 1994, it was canceled in 2007 because the area of pasture lands had decreased substantially. Poaching is still going on today, but the Omani government is taking strong protective measures and has fenced in a huge area for this purpose.

Currently, there are over three hundred antelopes in the Jiddat al Harris Region. These animals can be observed at the Arabian Oryx Sanctuary Center. During the daytime and at dawn or dusk, Oryx antelopes are always looking for shade and rest, which also greatly increases the probability of a sighting.

One of the most renowned pictures from Musandam is of the fjord-like bays, found here in many places along the…

One of the largest, most imposing structures in Oman is the Sultan Qaboos Mosque in Muscat. It is the country's…

Anyone interested in the north of Oman should pay Musandam a visit. Musandam is a peninsula with about 30,000 inhabitants.…