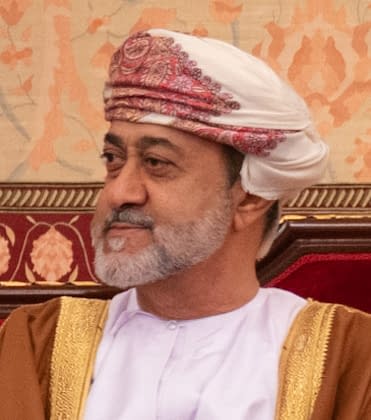 Sultan Qaboos ibn Said al Said, who was very popular in Oman, ruled for almost fifty years. After his death on 10 January 2020, his cousin Haitham bin Tarik al Said succeeded him, as Qaboos had wished in his will. Haitham, most recently the country’s Minister of Culture, was considered the favourite to succeed the childless Sultan. The continued existence of the ruling family Al Said is preserved – as is the country’s role as mediator, which Haitham is just as concerned about as his predecessor.

Before taking office
During his studies in England, but mostly as a direct participant, Haitham, who was born in 1954, was able to follow the so-called rebirth of Oman and the country’s path into modernity that his predecessor Qaboos inspired. Haitham spent almost twenty years as Under-Secretary of State and Secretary General, one of the senior officials in the Foreign Office in Muscat. In this capacity, European diplomats have seen him as level-headed, wise and somewhat reserved. Since 2002, he has been Minister for Oman’s cultural heritage, an office that has been a high priority for Qaboos. Just like for his successor, the reconciliation of tradition and modern life played a special role for him.

The role of the Sultan
As a traditional Islamic head of state, both the executive, judicial and legislative branches are under the command of the Sultan. He is supported by a cabinet of ministers, secretaries of state and special advisory councils appointed by him. The office of Prime Minister, Foreign Minister, Minister of Defence and Finance is held by the Sultan himself. Under Qaboos, despite the absolutist state apparatus, a number of advisory bodies of people’s representatives had been set up to examine the ministries and draft laws. Voices were raised that Oman was well on the way to becoming an Islamic democracy. Haitham will continue to follow this path, as the new Sultan also combines traditional Islamic rule with modern views.

A man of balance
Haitham is a man of balance. Like in almost all oil states in the Gulf region, the construction industry is booming in Oman. In talks, the Sultan repeatedly stressed that the country should be open to tourism. However, while growth in the neighbouring countries is unstoppable and is almost becoming gigantic, Haitham in Oman does not want to overdo it. But the new Sultan is also facing challenges. Qaboos has led Oman out of abject poverty and into the modern age, and has been revered by the people. This is not an easy legacy for Haitham, which is expected to make improvements, especially in the areas of education and training, in order to counteract the high youth unemployment.

Traditionally defined, a Bedouin is a nomadic desert dweller who travels through the desert. In the past, nomads usually moved from pasture…

About 270 kilometers from the capital Muscat, you can find a wadi, which forms a palm-rich landscape in the midst…